Looks like we are going to need a new engine section. GM is supposedly saying 445 HP and 910 ft/lbs or torque. Hood scoups. Wow.

Is it functional, I was kidding about extra power, if it is like Ram Air then maybe it serves a purpose?

The article said it is very useful and an integral part in helping get more air into the engine to help make more power. I wonder when the Allison is going to get a few more gears?

Yes, more gears would help, even with fuel mileage, one would think. An 8 or 10 speed Allison maybe?

I would imagine that Allison is going to have to get beefed up a little as well with all that added torque. Maybe come through built up?

This should carry until 2020? I wonder if trans limitation kept some numbers down. You know all 3 want to be the first to advertise 500/1000.

Again the 16:1 compression living off the turbo + electronics= magic. Ba Humbug! Back in my day, diesel meant high compression was king and we liked it that way! Make that starter earns it's keep I say. Bunch-o whipper snapper engineers, consarn it!

I hear you Will. But I bet it is more about noise, black smoke, EPA and just general smoothness.

RI Chevy Silveradoman said:
I hear you Will. But I bet it is more about noise, black smoke, EPA and just general smoothness.
Click to expand...

In otherwords making a diesel more like a gasoline engine...

Lower compression helps with nox emissions primarily. Theres alot of questions surrounding this engine as GM has been VERY tight lipped(rumored to have been alot of problems, hence the late release of numbers). The hood scoop is functional, and from the pics I seen is just for the airbox intake. Haven't found much info on internal changes, but we do know it will no longer have a bosch fuel system, but instead will be running a denso injection system. Also the long lived garret turbo chargers are now gone. Don't know the exact details on the new one, but we do know it is definately a different supplier now(also rumored the change was a cost cutting meadure more than anything else). The bosch ecm's have been around for 10 years, but with the fuel system change they are also switching I believe to a hitachi ecm(they changed from an allison a50 tcm back midway through 15 to a hitachi t87), so it looks like GM will be doing all programming in house now(probably to make it easier for them to control security and implement there firewall's. Yes modern cars now have forewall's to try and block hackers from taking over cars). GM brought back the variable assist power steering in 16 for most hd's, so I'm guessing it will also be on the 17's as well. No word on chassis changes, but as stout as the 11+ is, I doubt they will change much on it if any.

Me personnally, even if I had the money, I would wait a year or two before I would consider one. Theres been quite a gap since they did there test run builds and now, and between that and so many changes, I would let others be the guinnea pigs.
J

Perhaps I was dreaming, but I thought that one just did.

JayTheCPA said:
Perhaps I was dreaming, but I thought that one just did.
Click to expand...

Ford is 440/925 for 2017, Dodge is 385/900(with the aisin trans option, 370/800 with the 68rfe, or 350/660 with the manual trans. And they only achieve peak torque for a very narrow rpm range inder ideal dof loading ), and now GM at 445/910(the real question is GM still using the latest tests, or did they go back to the older measurement standard to up the figures). So GM is top in HP, and middle in torque on paper. Will be interesting to see the real world tests to see if GM is still sabdbagging or not. They've always seem to win in all the actual real world tests even though on paper they shouldn't. The latest ALLISON control strategies I believe is a large part of this. Yes it's big, beefy, and heavy, but they have clutch materials that can maintain hold now with very little pressure. So the trans will spike line pressure up to 240+ during a shift, but drop back to only 80 or so once a shift is complete, thus GREATLY reducing parasitic loss.
Last edited: Sep 26, 2016

What do you do with all that power? Well you climb an insane 10-18% grade at the speed limit or more with max GCVWR with the tallest and longest 5th wheel trailer you can find with the boat or another trailer of some sort behind that.

Make sure to include a "cooling" subsection under that... That much power and GM cost cutting with a large aerodynamic brick of a real trailer like a triple axle 5th wheel on some serious grades in Death Valley - just saying GM needs to load that U-Haul truck backwards on the trailer and make sure it can sustain full power without boiling the batteries and washer fluid dry.

Had the roof peel off one new (defective of course) RV with 2008 power levels so I didn't say the RV had to survive...

You obviously have not looked at the cooling system in an lml. The radiator is MASSIVE! It has a 26 inch electro viscous fan. Look at the grille, it's frigfen huge, and the grille is even larger for the 17. I DOUBT cooling will be an issue. Other than the lly's, hardly anybody has had a cooling issue, and with the correct mods, MOST lly's can be fixxed and never overheat again.

Heres some pics I got off another site of it. 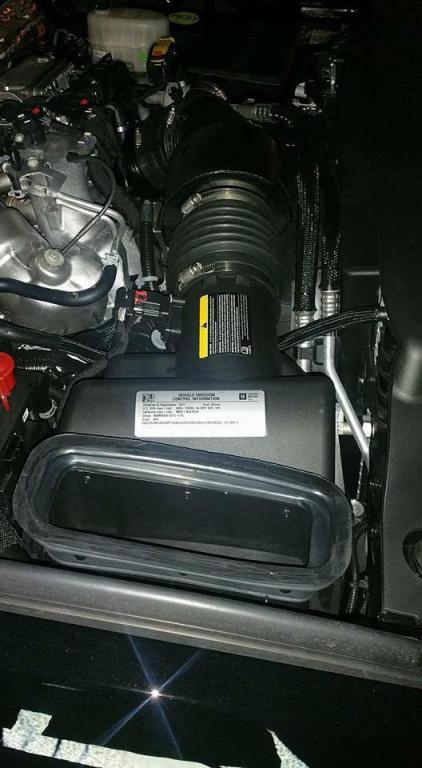 Ok, good to know Must have read either an early press release or a Q&A from a magazine interview where IIRC it was Ford whom made the claim of 1K ft/lb right off the showroom floor for '17.

I know it might have been discussed before, but how vulnerable do you guys think that DEF tank is hanging down so low on the GM Trucks? Tank is plastic I assume and road hazards or off road objects could puncture it, one could assume if it was hit just right. Am I missing it or is there a shield under the tank.

I guess, there are other things to worry about, like keeping it filled up, or other issues with it. I also think its ugly hanging down, but I guess step bars would help to hide it some.

Guess with our save the earth regulations it is here to stay.

Back on main topic, I hope GM is being a little conservative on their out put numbers. But there again what do we do with all that extra power other than bragging rights. The stock LBZ and later models are beasts in factory form and can get the job done for most of us when we are hauling legal loads within the factory ratings. Yea, it was mentioned earlier that more power would allow us to zoom up that steep grade and it is nice to be able to maintain the speed limit.

Don't get me wrong I would love to have a brand new Crew Cab GM with the upgraded Duramax. I always wanted to have the newest and most powerful vehicles I could afford. But, right now no more than what I tow, my LBZ still shines and gets the job done. I am sure some of you guys will buy you one of the new trucks and I will be glad to hear how it performs in the real world, once you put it to the test. Like Ferm said we need some Guinea pigs and time to see how it is going to work out.
J

Do not understand the drive for commercial level power either.

If I wanted to 'tow-big' for either recreational or typical commercial duty (typical contractor), I would get something like a small Freightliner or International that IIRC falls into the medium duty class.

Then again, can see where some contractors that pull heavy might want the light duty chasis in order to avoid CDL requirements that creep-in when air brakes enter to the mix.


Guess the manufacturers are figuring that their new smaller diesels and turbo gassers will take the role of where the v8 diesels once played.
Last edited: Sep 27, 2016

I wouldn't mind a new truck that has more power stock than my 2006 with a tune. I wouldn't want the payments though either.
I am more into longevity than newness. If I can get what Mike already has then I would be very satisfied. I am currently at 141K, where Mike is over 310K. By that time, hopefully I will get a smaller 4 cylinder diesel truck. Lol

Ford was saying 500/1000 up until a year ago, but once reality hit, that number got dropped. GM has been sand bagging using a different sae standard to measure hp for awhile now, so a chassis dyno check of the new trucks will be interesting. I do know the lml on paper is agood bit less power than the 6.7l powerstroke, but on the dyno they always seem to beat the powerstroke, and the same in real world tests. GM is still being VERY tight lipped on details of it other than a completely new egr system, entirely different injection system, and a new turbo(rumored to be a bv 70 borg warner is all I can find, and they have a bad track record). So far no details on the innards of the engine, so who knows what if anything has changed.
You must log in or register to reply here.
Share:
Facebook Twitter Reddit Pinterest Tumblr WhatsApp Email Link
Top