C&Cs are a different beastie than a 3/4T pickup truck. Different rear frame, beefier and frame rails at the standard width for bolt on aftermarket upfitter mounting of things like service bodies. They are essentially a 1T Standard Cab, but lack the single beam front axle, front leaf springs, body lift and 19.5" rims and rear duallies of the 3500HDs.

If they did use them on ¾T in '94, that's news to me. If they did, it had to be pre-shut down of the assembly line to address the runaway issue (which turned out to be the APP sensor design combined with the PROM programming), corrected with the three output APP sensor and a change in programming. Could it be somebody in the past didn't know the difference between the 5068 and the other IPs and just put a Stanadyne IP on it not knowing the difference? Any time back in the past (when they were still being made and new and rebuilts were plentiful) the application for ordering replacement pumps cautioned to check 3500HD for the 5058 pump tag or not on the existing pump.

Iirc, GM also had a recall to retrofit the early production 6.5TDs with the new style APP sensor and associated electrical upgrades/PROM.

Hey Guys, I haven't updated this thread is a bit so I thought it deserved an update. I have been playing with a DIY tune on my truck for the past few weeks. so far i have noticed some improvements in different areas. I have changed the boost table to allow higher max boost and added a little more fuel for over 50% throttle. things I have notice is when on a flat road accelerating up to speed normally (not dogging it) I am realizing I am up to 65mph quite quickly and a lot of times I don't realize or feel it! when I accelerate hard like on an incline I have seen boost pressures up to almost 15 allowing the PCM to control the boost. I did however see only one time where I was already going about 40mph and for whatever reason decided to see what it would do and stomped the pedal... the truck downshifted and took off lickedy split. I only held it for a few seconds until I saw my boost gauge showing 18 almost 19 psi. as soon as I saw that I backed off not sure if the PCM was allowing this or my solenoid was sticking, plus freaking out thinking I was about to blow something!

oh, I also changed the glow plug time vs temp table to get a little more time on the glows since my engine seems to start a lot easier when the time on the 60g glows have a couple more seconds.

I have not messed with any of the timing tables yet frankly because I'm afraid to! here are some screen shots of the changes I have made compared to the way they were before. I have not taken my fuel mileage yet to see if there was any changes, I will post that on my next fill up. 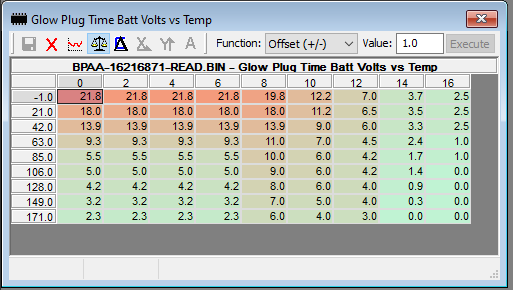 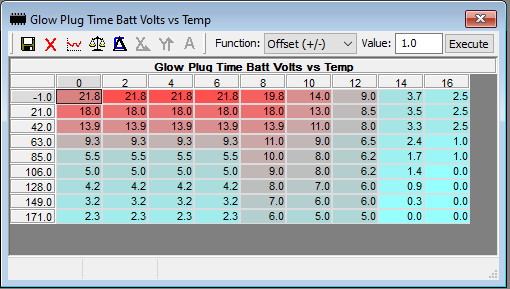 I did set the SES light on while running this tune while on the freeway cruising at 70mph, but I think it's because the boost pressure was higher than what the variable is set for to flag DTC 78. so far I have not found the setting in there were it tells the code to set when above or below a value. I may need some help on that, but I am still reading and learning as much as I can when time allows me.

let me know what the thought are on these changes. I have been working on a second version if this tune adding slightly more fuel, and making slight changes on the boost table, high idle changes for both "in park" and "in gear" settings. I want to test it out later, but not until I get my current fuel mileage and do more research on triggering the SES light. also making sure my boost solenoid isn't failing!

Seems like You are making some nice progress.
Be good to het that boost so it maxes out at not over about 15PSI.
Be interesting to learn what the fuel mileage went to.

Did my mileage today for the first time since I installed this tune and got 13.5 mpg on mixed driving. it's still in the average I have been getting depending on how much foot I give lol it's been averaging around 14.

And what was it before?

it's been varying between 13 and 14 or so, I need to find my last receipt and see the exact number. hopefuly it's still in the truck. I need to get a notebook and start keeping a log in there lol

I’ll be curious to see if this ATT turbo will increase the fuel mileage of My truck.
It had been running right at 18 MPG.

Yeah, always good to log it before any changes along with 2 runs of 0-60. Then note how fast you normally get up to speed. Use cruise control all you can - it is always a fuel saver.

What often happens is people make a change, try to notice if there is more or less power, then alter the mpg because of how they drive different. Like when I went from n/a to turbo. I swapped to the turbo injectors which had about same amount of miles on them, turned up my fuel screw and added turbo. Got same exact mpg, but 0-60 was huge improvement. Took a bit before of playing before I ran a tank accelerating st the old rate, and saw a couple mpg improvement. Then of course went back to pedal/floor combo.

dbrannon79 said:
it's been varying between 13 and 14 or so, I need to find my last receipt and see the exact number. hopefuly it's still in the truck. I need to get a notebook and start keeping a log in there lol
Click to expand...

I gonna have to check this out! Thanks

Signed up for Fuelly.com but I can't figure out how to get it to show in my signature!

I took a quick glance at it, Fuelly. I’ll check it out a little deeper and see if its something I’d use.

MrMarty51 said:
I took a quick glance at it, Fuelly. I’ll check it out a little deeper and see if its something I’d use.
Click to expand...

dbrannon79 said:
the unfortunate part is they charge a subscription if you want better features with it
Click to expand...

Yup, I figured that out.

if someone does find a good app for fuel mileage let me know. free is preferred but I don't mind paying a one time purchase for it, not a subscription. I'd like to find one that can use the GPS to track city vs highway and monitor the acceleration so to speak.

maybe another good reason to want a tablet intergrated into the obd1 system for datalogging with tracking mileage too. not I'm geting ideas wondering if tunerpro or another datalogging app can do this all in one app.

Geeze, whatever happened to just using a pocket notebook and writing down the date, your miles travelled, gallons used, MPG, type of driving and any additional notes like oil added/oil change/antifreeze flush, etc.?

Husker6.5 said:
Geeze, whatever happened to just using a pocket notebook and writing down the date, your miles travelled, gallons used, MPG, type of driving and any additional notes like oil added/oil change/antifreeze flush, etc.?
Click to expand...

My iphone, it has a thing called “ Notes “, i have a note on each behicle I own. Make, year, model. Whenever I do anything to a vehicle, I add that to the notes note.
GPS could also be tracked through that. Leave the GPS for the phone turned on, reset, or write down the mileage for as long as the vehicle is in town, same for if heading out onto the road.

I’m sure there could be plenty of ideas crop up.

Gentlemen, how is everyone doing today!

today I was looking at my tune I have been working on and something struck me as odd and I'd like to get some experts advice and opinions here. I was staring at the base fuel table comparing it to stock. I also managed to get the old application CATS tuner working as well by purchasing the definitions from Westers Garage.

looking at the base fuel table I notice that the mm^3 fuel amounts increase as both APP % and engine RPM increases. this made me think a minute about engine load where the only time you need more fuel is when the APP is pressed and the RPM is lower. when you reach the desired speed, the fuel should decrease as with the load. at higher speeds you will have the APP pressed further to maintain the speed, as the same follows RPM. your RPM will increase as speed increases due to the gear ratio and tire size weather you are just maintaining speed in cruise unless you are traveling down hill, then APP % will decrease as you let off the pedal keeping you at the same speed. in the table it shows the opposite. max fuel rate is only shown at max RPM and APP.

if I am thinking correctly, max fuel should be showing at max APP and lower RPM then lessen as the RPM is increased at the same APP %. let me know thoughts on this. Here is a couple of screenshots from both tunerpro and CATS tuner. 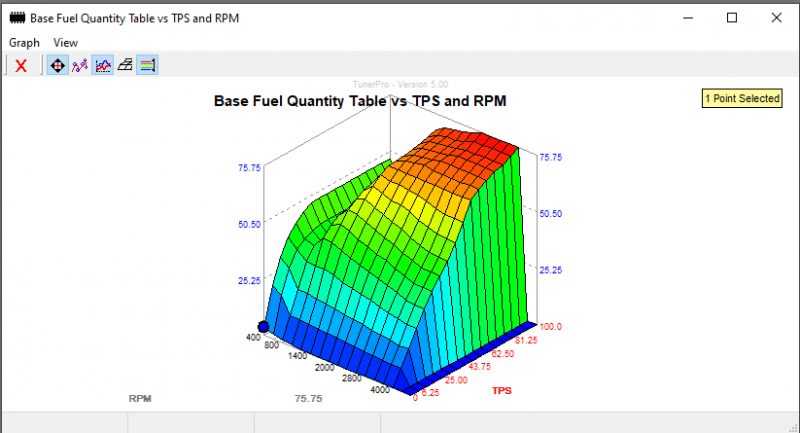 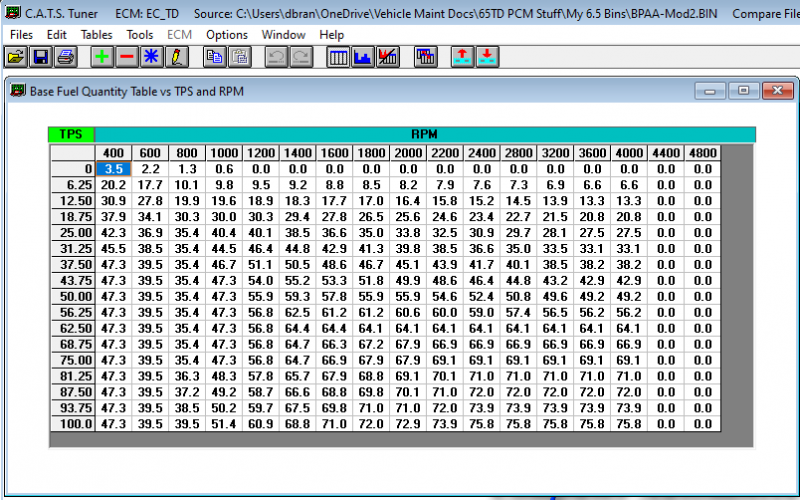 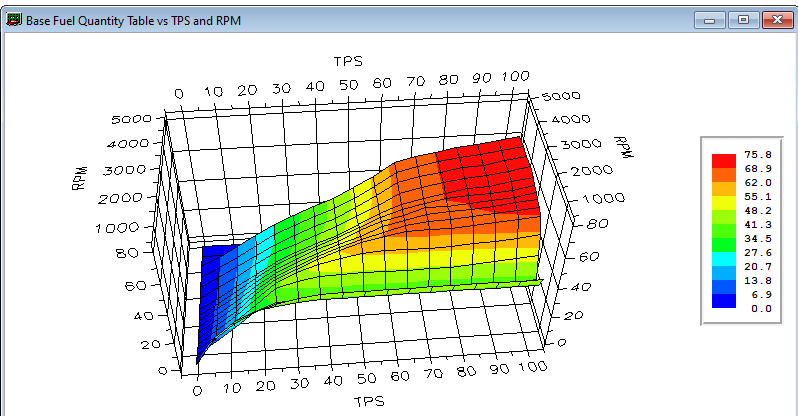