Years ago the company I worked for had Ford 555 backhoes that were heated using a dipstick heater . Pull the dipstick out , insert heater and plug in . They worked pretty good for what they were . I think Napa had them .

Anybody got an idea why my turbo would be working intermittently...Sometimes it will spool up nicely other times it's not spooling at all.

Vacuum leak in line that is intermittent by how the hose sit during vibration?

check that the arm moves properly.

A video showing boost cut out or not build would help.

Out of curiosity what all is the harness that goes to the headlight switch hooked to because earlier tonight I heard a kind of buzzing electrical sound coming from it, then the headlights went out I hit a couple times and they came back on and I noticed some other stuff in the truck was affected by it..

Do you have any other lights hooked to your headlights? Driving lights etc

No. There were little round lights in the front bumper when I bought it. Don't think they were stoke.. didn't work so I removed them...I THINK they might have been hooked to a toogle switch at one time..I have not hooked anything to the headlight switch since I've owned it... Got a spare switch I can plug in to it to see if it helps..seems like I read a post on here one time that talked about a orange or maybe yellow wire that goes to it that fry's or goes bad..but I don't really remember.

The headlight switch has a bimetallic strip in it that when over heated bends and opens the circuit. If you wait a few minutes it will cool off and close. It will get worse until it totally fails. My headlights are on relays as well as my driving lights.
D

She ain't revved 'til the rods are thrown...

The connector to my headlight switch fried itself somehow, think it was an orange or brown wire that melted and would cause my dash lights to go out. Check the connector when replacing the switch, if it looks suspect replace it to before it shorts and melts. Also should you lose any headlights or tail lamps check the fuse panel in the side of the dash by the door, a lot of the lights are inter-connected and a bad fuse for the tail lamps could affect you having cluster lights working or not

Thanks guys..yeah I swiped a new switch out of parts truck..gonna try putting it in..I lost driver side rear turn signal and brake light..tried changing bulbs and circute board but didn't fix them.
D

She ain't revved 'til the rods are thrown...

The lights on these trucks can be maddening

Check the rear tail light wiring harness. If you have a connector in it for your trailer wiring make sure it's all snug together. I put dielectric grease on the contact points, really essential here in the rust belt. And use wire or a zip tie to hold all the plugs together, the plastic tabs are too weak to hold after all these years, especially in the cold.

When you have the funds upgrade the rear tail lights to LED. Also one time I thought my rear turn signal was out, but it was a front turn signal bulb, don't let it drive you mad. Again dielectric grease is your friend

Im arguing with my self over what to do honestly.. wife's grandmother passed away on Thanksgiving Eve..she had signed over her 03' pontiac grand am to us few months back..but she had use of it till she passed..that was the agreement..it's only got 70,000 on it and never driven in snow, so practically rust free and in great condition...and gets 20 something to the gallon.. could probably get 2500-3000 out of it.. especially during tax time...the debate is, do we put it on the road cause of the fuel mileage it gets and runs good, or sell it and use a chunk of the money to do all the repairs the truck needs...and use the rest on the house..just not really sure what to do...a truck is a money maker and better for moving stuff etc and safer in a crash...but car does not need bunch of work done on it and gets 2-3 times the fuel mileage the truck does....

On the taillight- the board the light bulbs plug into goes bad also.
So checking if thats it without a spare is: open tailgate and remove the 2 Phillips screws and take out taillight on both sides. Plug the good light into the bad side and test it. If that fixes it (since you said already did new bulbs) it hen the board is the issue. I know I used to have a set of new ones for the fail day on my pickup- have to look and see if I still have them or gave away already.

On the car vs truck- I know $ is tight. But if you can use the car for all the normal driving and keep truck since you need it for income in construction- plus have a backup incase one dies when needed- thats the best option imo. How much the statesteals from you to drive them both by registration and insurance.. thats a problem.

With no construction work right now, can you do uber or similar with the car for a while for income? Get all details incase they say car is too old or something.

Once we get stimulus check. Probably Gonna put car on road..cost 400$ at least..
On to the truck... I THINK I figured out why it feels like it's dragging so bad at times..at least what part is causing it...kept thinking it was in the brakes..but that doesn't make sense..cause the brakes would smell like burning if they dragged..
Lately it's been shifting hard..sometimes it will feel like it's having trouble getting up to speed, then I hear a clunk, or bang from right under me and it takes off like you released a emergency brake while rolling.
I think it's in the tranny..like it's sticking in a gear or something..I've had it scanned but no codes..but that would only show electrical problems not mechanical...
At the time the problem started we had done a fluid and filter change on the tranny. And did a brake job, always figured we screwed something up in brakes..we did bust a brake a line and had to replace with different size that we had at shop..but don't think that hurts anything..
Been dealing with it for quit awhile, cause could not figure it out..
But with tranny doing what it is, I'm thinking maybe it's sticking in a gear then brakes loose when it wants it..then maybe when it down shifts it gets stuck again...not really sure..I'm not a tranny guy...been told not to ever flush the tranny, cause it does something to screw it up..wish I could remember what fluid we put in..

Does your TCC (Torque Converter Lock) behave normally when driving? Does this 'bang' happen at a particular RPM?

(just things to consider; I may not be around much to talk about it, but there used to be some stuff in the Library on TCC issues, and a few of the guys have done mods on the OBDI versions.) 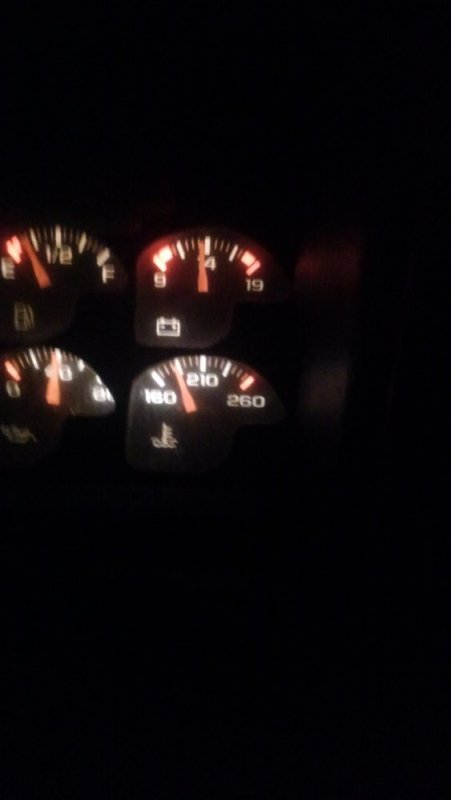 remember I put twin 170 thermostats in it.. I may not remember correctly but I thought somebody said the torque converter doesn't lock up until a certain temperature and this truck runs really cool since I switched the thermostat which was quite a while ago... I don't remember if it was about the same time as I did the brakes and tranny change
J

ak diesel driver said:
The headlight switch has a bimetallic strip in it that when over heated bends and opens the circuit. If you wait a few minutes it will cool off and close. It will get worse until it totally fails. My headlights are on relays as well as my driving lights.
Click to expand...

The relays are the way to go. Takes the load off the headlight switch. Works the same way the lift pump relay upgrade works.

I had mine wired so the dims stayed on with the brights.

Stoney said:
View attachment 63210remember I put twin 170 thermostats in it.. I may not remember correctly but I thought somebody said the torque converter doesn't lock up until a certain temperature and this truck runs really cool since I switched the thermostat which was quite a while ago... I don't remember if it was about the same time as I did the brakes and tranny change
Click to expand...