So 2 guys popped by today to say hi and return a borrowed 60” hd hi-lift jack they borrowed for some offroading trip. They each have Hummer wagons. They each bought one of the $800 ARB jacks that are hydraulic and lift with an adjustable foot similar to the one hi-lift has. One guy made a custom mount and put his on the side of the roof rack. The other guy just layed his in the back with a cooler and other stuff.

They both are fighting ARB for damages, but probably gonna loose. The instructions say store the 4’ high jack VERTICALLY. Turns out the oil leaks out when horizontal for a couple weeks. Ruined the fender well and floor carpeting in one and on the roof mount dripped down the back window and along the paint of the fender. He said he didn’t even look at his for about a month because its a play toy- but it was apparently long enough time to damage the paint.

So... although the ARB jack they did like more than the hi-lift because you don’t have the handle-o-death and it’s more stable- they said tell everyone out there wait until version 2.0 or 3.0 because like the compressors and refrigerators- the first model ones are problematic.

So I will stick with my hi-lift when absolutely needed, but my go to is still my $150 (back then) harbor freight 3 ton aluminum floor jack. To be fair- it might eventually leak oil also- it just never has yet but is only about 8 years old.

Those hi-lift Jack's can be kinda dicey sometimes, never seen or used the ARB one
J

Given the lead-in statement that there is a written requirement to store the unit in one orientation and the individuals elected to ignore this requirement, agree that it looks like Plaintiffs will lose once the RTFM defense is applied. Might even have to pay for Defendant's attorney fees too. And face take-down orders if Plaintiffs put negative comments out on the Internet.

The Hi Lift is a great jack when used within its safety limits aftermarket has addressed some of the misgivings w/accessories for it to be safer.
I have found that bottle jacks work great also and are nearly impossible to damage, yes they will leak at times but great tools.
However; this is a great jack to. 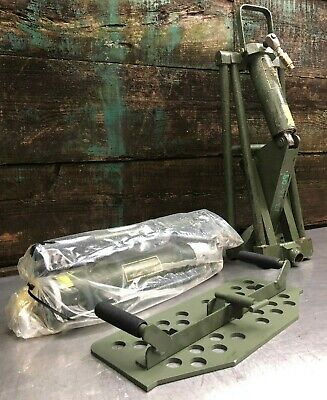 Yeah, the handyman/ hi lift can be dangerous for sure. I grew up using them but still managed to get my chin smacked enough for stitches one time. That was kinds the idea behind what arb made was a little safer version of it- which it is. But the problem is there is no real way to store it in a rig without it being horizontal.
I never sawhe instruction sheet- they just said when they called them about it that was the response. I agree if they put it in the instructions- not worth trying any lawsuit. But all I imagine looking at it is it is just a bottle jack with fancy housing, so how they leak oil from being on their side - idk. But kinda dumb because how they would expect anyone to carry it in their rig in vertical position is beyond me.
The bogart hmmwv jack works ok, but is insanely heavy. Akward to position unless you want to lay on your belly in the dirt and mud. And in mud over 4” deep is a nightmare to position. I used one a couple times (once in mud obviously) and it wasn’t hard to decide to just get an aluminum floor jack and be done.

But these ARB jacke are being marketed more and more and wanted to give fair warning before some of the guys here that do off roading wether hummer, pickup or jeep spent the big bucks thinking way more expensive but worth to to never have a problem again.

A couple pics for those who haven’t seen one yet. They are 3 foot tall. Weigh a few pounds less than the handiman/ hilift style jacks.
Note the bag- just the bag alone sure makes it seem they are ok to carry and store horizontally.
The price of $800 is painful but arb is not known for anything low cost so the price/ value is up to each person. I would like to see who ever does a better version of this in the future. Or if arb solves the current issue with a redesign of the leak problem because it sure felt safer to use and was definitely easier. There is YouTube videos comparing them but most are by people selling the arb so....

Probably best to have a roof rack, like the Jeep Rubicon, then run some steel tube to the frame from the roofing rack, behind a door or behind a rear tire. Mount the jack to that with a real secure lock. Probably in its satchel to keep durt and dust from eating it up.
You must log in or register to reply here.
Share:
Facebook Twitter Reddit Pinterest Tumblr WhatsApp Email Link
Top