Yeah, the only proper way to do an alignment is to lock the steering wheel level to start with (not using the steering column lock system, which often locks with the wheel slightly canted at an angle) but with a device similar to The Club anti-theft lock, that holds the wheel in place while the alignment is done. Seen one, it has an adjustable piece with a padded plate on the end that telescopes out and wedges firmly against the door panel to prevent the wheel from turning during alignment.
J

Husker6.5 said:
I'd tell them that they're full of it, everything they're telling you needs to be replaced had already been within the last 20K miles with Moog parts, you know damn well that they don't wear out that fast compared to OEM that can go 150K before needing replacement and that you'll take it to a different shop and when they confirm that your tech was trying to rip you off, you'll take them to court. Then tell them that if they agree to align it without making any of the unnecessary repairs they "recommend", you want a printout of the before and after specs from their alignment machine of the front and rear specs for Toe, Caster, Camber and F/R tracking (rear axle parallel to front hub line). If not, take it to a different shop.

I had a similar, but not same, situation with my old 95 Camry with about 342K on it at the time five years ago. Had put new tires on it a couple of weeks before and wanted it aligned before taking a 1600 mile road trip. Took it to the shop and was called about an hour later by the tech saying he couldn't align it until I replaced the right lower ball joint and the left rear adjustable rear tracking bar. Told him I'd get it done and bring it back to get aligned. So I picked it up, took it home and raised up the front of my Camry. Yup, passenger lower ball joint sloppy. Went around back and scooted under, rubber in the outboard eye of the rear adjustable tracking link was rotting and crumbling. So I ordered a pair of lower ball joints (might as well replace both if doing one, as the other is due to wear out soon) and a pair of rear lower adjustable tracking bars (for the same reason), did a few hours of wrenching the Saturday after they came in and got an appointment for it to be aligned that Wednesday. No issues from the tech about parts needing replacement.

Or, you could also try power washing everything so it looks like it was cleaned off to be worked on, then take your Burb back in a week from now and tell them you had everything replaced they said needed replacing, now align it, and see what other "needs replacing" B.S. they can come up with, if any, before aligning it, then go to what I suggested in the first paragraph. Jmho.

Why would a person go back to a rip off shop like that?

I had that happen with the brakes on the Honda. Wife took it to get serviced. They told her it needed brakes. I told her to take it to a guy I use. He said the brakes had about 60% life left. I left a nice online review for the dealership.

jrsavoie said:
Why would a person go back to a rip off shop like that?

I had that happen with the brakes on the Honda. Wife took it to get serviced. They told her it needed brakes. I told her to take it to a guy I use. He said the brakes had about 60% life left. I left a nice online review for the dealership.
Click to expand...

Because sometimes it's the only game in town - or within 30 miles.

So started in on injector replacement and the shop was at least partially right. The bushings on the passenger side upper control arm are shot: 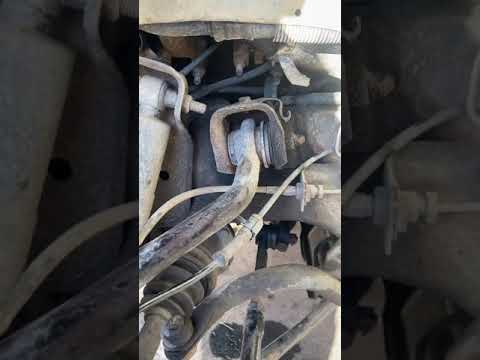 Now it’s not the rubber that’s shot, rather it’s the inner sleeve that rides on the bolts that is worn. These were replaced when I first bought the truck which was 82K miles ago. Obviously I need new bushings, but will I need new bolts?

You can get the bolt kit from napa. Anytime we do control arms we replace the bolts to make the alignment easier. If the come apart with no issues you can clean them up and reuse them. Here in NE ohio they usually are so rusted we have to replace. Gotta love the salt

I just replaced inners/outers tie rods and upper control arms. Mine were still tight but I was worried they would snap in half from the corrosion.
Losing steel by the pound.

Just waiting to get front end aligned and new U joints.

Yup, replaceum. Thats what I’d do and We have no rust.
You should see how My used bolt collection builds.