smokymtn65 said:
@WarWagon I like your 5th wheel about the right size and # of slides
Click to expand...

I second this remark.

Looking at the specs on these and they are not too light.

Husker6.5 said:
If you notice, the 30'+ all went to 3 axles about that time, too, like adding a tag axle to carry some of the weight and reduce the leverage hanging out back.
Click to expand...

I met a couple who bought one of those triple axles in Airstream form. Those things weigh in around 10K#.

Upgraded to a 1 ton and still complained about the tongue weight. Started to go after opportunies to either move stuff in the RV rearward or eliminate. outright Have not seen those folks in a while so I do not know how they decided to solve that tongue weight challenge.

Duvall said:
I second this remark.

Looking at the specs on these and they are not too light.
Click to expand...

Weighed: 1720LBS added on truck rear axle and 7780LBS on the trailer axles. Add 80 gal of water +668 lbs and some stuff guess around 500LBS. I don't have the loaded slip handy: just when I bought it with tanks empty.

It loved the power mods I did to the 2003, but, EGT and ECT were a concern on the grades around here.

End of the day I am ok with it being heavy as this is a well built and insulated well. That October '18 trip at altitude 5417' Naturita, CO was in the low 20's F overnight. We were comfortable. I run a multi weight oil in the generator now as straight 30 weight is way too thick that that temp for a splash lube engine! (After summer 2 day stop in Yuma, AZ I wound up fixing the AC ducting as the cold air was recirculating under the intake cover. We have already established my lack of sanity...)

Of course the Four Corners was CLOSED due to hours of operation when we went by it. A place you only visit once... One with the main slide out in Ute Mountain Casino RV park. One of the best restaurants for service we ever got. OOPS! This spot wasn't available for some reason. Pictures are worth 1000 words. I see your recliners have the built in seat warmer options installed!

So the start of the ten day '18 trip was interesting. A cold front was coming down from the North and the remains of a tropical storm was coming up from the South. We were in the middle of it. So we had some extreme cold as well as rain to start out. This included the Monsoon storm that dumped the hail on us.

From the start of the trip both ends of a double rainbow. We chased it all afternoon. After the hail storm mentioned earlier in the same spot. One of my favorite pictures from the North Rim Grand Canyon, 2017. Gonna Rain on us... But the blue in canyon during the sunset is my favorite. This color change I will never forget. (Took me awhile to find where I put these pictures as we took a lot of them on the trip.) When you see the Grand Canyon in person, the scale is simply incomprehensible. No video, photo or description is even close.

Listening to a musician play in person always sounds better than the best recording.
So looking at pictures taken by a tiny lens of the best artwork ever created - not even a chance to take it in the same way.
But man that is some awesome pics!

It's not all about the Dodge Cummins. But OT...

2010 - Patch earning it's parts hauling RV's from Tucson auction to used RV dealer. Dad followed in a Motor Home also being delivered. For those who know about CA retro DPF laws this is on the AZ CA border: as far West as I would go commercially. Made enough that month to buy $800 in front end parts for Patch. Energy suspension poly bushings and all. Most of the drunken sailor wander was from a worn out loose rag joint into the steering box. btfarm said:
When you see the Grand Canyon in person, the scale is simply incomprehensible. No video, photo or description is even close.
Click to expand...

That was the beginning of Jody's Trek P400/4L80E repower saga - he and Connie were headed to the Grand Canyon for their wedding anniversary to reenact their honeymoon by hiking from the North Rim down to the Colorado River and back up to the South Rim. As he pulled into the campground here in Lincoln the engine died. Broken rocker shaft pedestal. They took their Aveo they were towing on out there. About a mile or so down the trail Jody stumbled and tweaked his ankle bad and had to be mule-evacced out. Hospital revealed he'd broken his ankle. This was the guy, who for an annual firefighter charity event just the year before - just before his retirement - ran up 20 flights of stairs in full firefighting rig - boots, pants, coat, gloves, helmet, oxygen tank and mask!

Delamanation. This hairline crack would open when the truck was hooked up. This '18 trip with the rain was enough to finish the delamanation process. Normally it's just a wavy soft spot, but, with the stress crack it opened up. Before and after $1K pics. 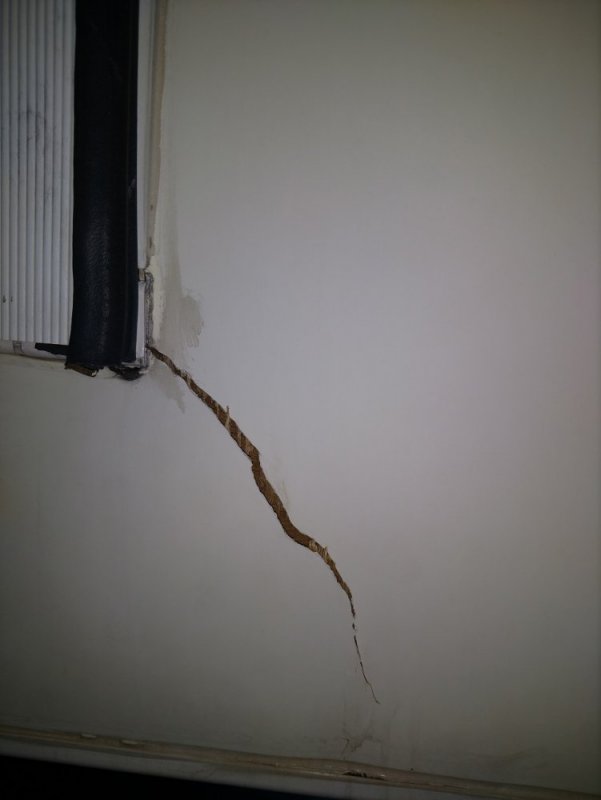 Recommend starting a new thread rather than derail this one.

Well, I guess I can weigh in as my family started out in the summer of 1969 when I was 8 years old, with a 1966 Dodge cab-over van with the seats removed and two folding nylon web cots that had leg adapters so they could stack into a bunk bed down the driver's side for mom and me. A folding spring suspension cot w/mattress for my dad, my year old sister in a travel bassinet, a Thermos steel cooler and a two burner Coleman gas stove.

The next two summers were spent towing a borrowed from a Family friend's Apache Mesa pop up hardside camper. As a 9-year old, I could crank up the roof on it, pull out the two extension platforms on each end and put the angle braces under them, fold up the three end panel pieces (instead of the canvas found on fold-out "tent" trailers like Colemans, etc.) on each end and then crank the roof down an inch to lock everything in place. It had a gas stove, small travel fridge and countertop built in. The dinette made into a full-sized bed and each end platform a queen-sized bed. Apache went out of business in the late 70's , as far as I am concerned, to this day, the best pop-up campers ever made because they were double panel insulated hardsides with real windows, NOT canvas with soft plastic window panels. Have often wished I had the money to buy one when they rarely come available on e-Bay. To me, the ideal weekend at the lake getaway camper, or away game weekend against Rutgers camper, to tow behind the Burb.

Our family's next jump in fall of '73 was to an ex-Trailways 1946 Brill bus that my dad bought from some Dr. in New Jersey who had done the motorhome conversion himself. An OTR bus to a Class A motorhome conversion is a house on wheels! We flat-towed a 1967 Saab 97 station wagon behind it. Multiple long-haul, long duration vacations with it, starting that winter with the 1974 Cotton Bowl, Nebraska vs Texas, via Lincoln to Los Angeles to San Diego to El Paso to Dallas to Lincoln. Summer trip to Duquoin, IL for the 1974 Family Motor Coach Convention. '74 Winter vacation down to New Orleans for the 1974 Nebraska vs Florida Sugar Bowl and back. Summer of '75 family vacation from Lincoln to San Fransisco, to Eureka, CA to Salem, OR for the 1975 FMCA convention to Seattle to Boise, ID to Lincoln.

Spring of '75 dad sold the Brill and bought a used professional conversion by Angola Coach Company of Angola, IN of an ex-Trailways 1956 Flixible VL-100 (think the look of the old Greyhound SceniCruiser of the 1950's-60's, but Trailways's version) powered by a 6-71 super-turbocharged Detroit. All the conveniences of home and then some, like a central vacuum system, Nu-Tone built in food processing station, Jenn-Air gas cooktop and range, etc. It's maiden voyage, 3½ weeks to Lake Okoboji for the July 4th weekend meeting of the Nebraska/Iowa chapter of the FMCA, then on to Chicago, Cass Co. WV to ride the Cass County Scenic Railway, then on to a day at Monticello, a day at Mt. Vernon, then two nights at an RV Park in Arlington, VA to spend three days touring D.C., including the Smithsonian's huge Bicentennial Exposition on the National Mall. Up to Baltimore/Annapolis and then the DelMarVa Peninsula to my dad's childhood stomping grounds of Haddon Heights, NJ/Greater Philadelphia area for 3 days to visit my grandmother and great aunt and see the sights of Revolutionary Philly, like the Liberty Bell, Independence Hall, or Ben Franklin's press shop. Then onward up the Palisades, north of NYC and over to Mystic Seaport to see the Tall Ships, then up to Boston for a couple of days to see things like the Old North Church, Paul Revere's shop, Boston Tea Party site and Old Ironsides. Then on to New Hampshire and Vermont to the Finger Lakes/Lake Champlain region of upstate NY and north to Montreal the day before the opening of the '76 Summer Olympics. Took the Thousand Islands Pkwy along the St. Lawrence River towards Toronto, stopped in a little town and had lunch at a sidewalk café when all the Canadians stood up and began applauding - as the Olympic torch runner came running by out in the street not more than 20' from our café table, heading from Kingston, ON where the boating events were being held and that flame just lit to Montreal for the next day's Opening Ceremonies. Through the tunnel from Windsor, ON to Detroit, MI and then onto Centreville, MI for the 1976 FMCA convention. We used it every Home Game for the Husker football team to go down to Memorial Stadium with 15-20 friends of my parents to park in the bus/motorhome lot and tailgate in style and the once or twice a year Away Game expedition to OU, KSU, KU, ISU, OSU or Mizzou until it went bye-bye in my parents' divorce in 88.

I have long considered your choices @epdmroof , and as I'm just a few seasons away from 65 and retirement, I have come to the conclusion that, after having experienced almost all forms of motorized camping, that I'm going to sell my house and buy a Class A, Over-the-road (Prevost, MCI, VanHool, Golden Eagle, etc) bus chassis-based 40-45' motor home (used, but in good condition, let somebody else take the depreciation on a $2.1M new Prevost coach!). I will NOT buy anything with slideout(s) due to complexity, structural, mechanical and leak issues and failure rates, nor will I buy an Allegro, Monaco, Winnebago, etc that are essentially a pusher truck chassis and the motorhome shells are essentially 2x2" wood 'studs' in frame pockets and aluminum/fiberglass siding attached to them - as are most pull trailers and slide-in campers are, either.

And I certainly wouldn't do a Class B motorhome based off of a van cutaway chassis like a Winne Brave. Period.

My plan is to take my Class A and spend winters in like southern Arizona or New Mexico at an RV Park with hook-ups for 2-4 monrhs, once Spring hits, pull up roots and spend a couple of months wandering the States, seeing sights, visiting relatives, etc., then spending the worst heat months of summer at an RV park in Maine or Canada, then come Fall, maybe check out the colors of New England, and flat tow a small car behind for local travel excursions/shopping, etc. You never notice them back there weight or MPG-wise.
You must log in or register to reply here.
Share:
Facebook Twitter Reddit Pinterest Tumblr WhatsApp Email Link
Top